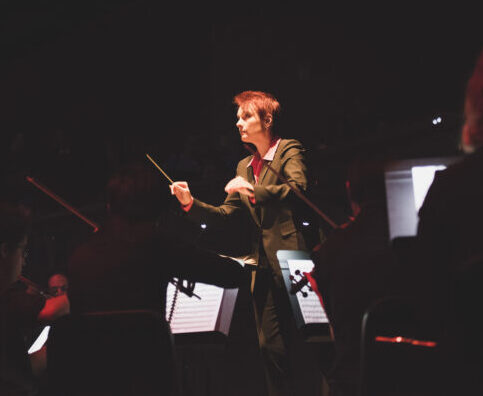 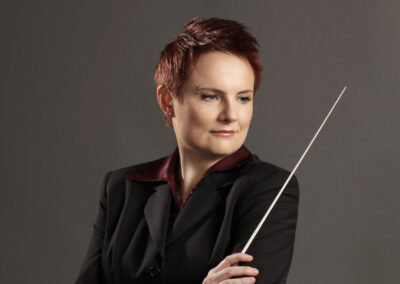 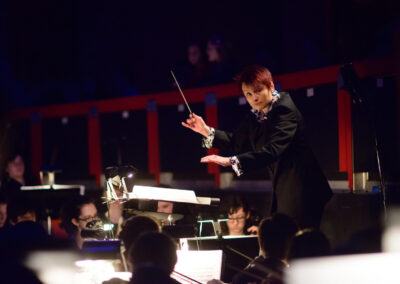 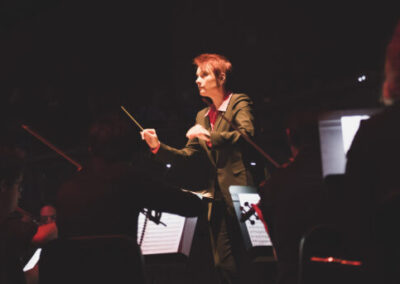 Carolyn Watson is Principal Guest Conductor of the Kansas City Chamber Orchestra and Music Director of the La Porte County Symphony Orchestra in Indiana. Originally from Australia, she has been based in the United States since 2013 during which time she has led performances with the Austin Symphony, Catskill Symphony, Detroit Symphony Civic Orchestra, Interlochen Philharmonic, Kansas City Ballet, Kansas City Chamber Orchestra, St. Joseph Symphony and World Youth Symphony Orchestra. Recruited internationally as Music Director of the Interlochen Arts Academy Orchestra, she won the 2015 American Prize for Orchestral Performance with this ensemble, also collaborating with soloists including Mark O’Connor and Alexandre Tharaud during her tenure. Carolyn continues to enjoy an ongoing association with Interlochen as conducting faculty at Interlochen Arts Camp and for Interlochen Online.

An experienced conductor of opera, recent engagements have seen Carolyn lead Hansel and Gretel for Amarillo Opera and Fellow Travelers at Des Moines Metro Opera, along with a production of As One. In 2020 she conducted ‘And Still we Dream’ for the Lyric Opera of Kansas City, her third engagement for the Lyric in as many years. This production was featured in the Emmy-Award winning PBS documentary, Higher Octaves: Leading Women in the Arts. In 2019 she was engaged to conduct the world premiere of Gordon Getty’s opera at Festival Napa Valley, and in 2017 Carolyn was one of six conductors selected for the Hart Institute for Women Conductors, where she led the Dallas Opera in two public performances. Carolyn’s 22-23 season sees debuts with the Cape Symphony, Monash Academy Orchestra (Australia), Traverse Symphony Orchestra and Columbus Indiana Philharmonic as a Music Director candidate, as well as return engagements with the Lyric Opera of Kansas City and Kansas City Ballet.

A committed music educator, Carolyn currently serves as Director of Orchestras at the University of Illinois whilst continuing to enjoy an active freelance career throughout the US, Europe and Australia. Carolyn was a Fellow of the American Academy of Conducting at the Aspen Music Festival where she studied with David Zinman, and has participated in master classes with Marin Alsop, Peter Eötvös, Yoel Levi, Martyn Brabbins and Alex Polishchuk. Carolyn is the recipient of a number of prestigious national and international awards for young conductors including the Brian Stacey Award for emerging Australian conductors, Sir Charles Mackerras Conducting Prize awarded via the Australian Music Foundation in London, Opera Foundation Australia’s Bayreuth Opera Award and Berlin New Music Opera Award and the Nelly Apt Conducting Scholarship. She is the beneficiary of support from the American Australian Association’s Dame Joan Sutherland Fund and a Sheila Pryor Study Grant from the Australian Opera Auditions Committee. She is also a Churchill Fellow, and was the recipient of a Creative Fellowship from the State Library of Victoria.

Carolyn holds a PhD in Performance (Conducting) from the University of Sydney where she studied under Imre Palló. In 2008, she had the honor to conduct on the occasion of the Pope’s arrival in Australia for World Youth Day in front of a live audience of 100,000 and international television audience of five million. When not conducting, Carolyn loves indulging in her hobbies of traveling and travel photography with future plans including Antarctica, East Africa and the Silk Road. She is also a foodie, and connoisseur of fine wine and craft beer. Carolyn enjoys spending time outdoors with her fur baby, ‘Poppy’ (Popcorn) Watson, a six year old King Charles Cavalier Spaniel.

This compelling concert opener was composed in 2019 by rising star, Kevin Day, who was at that time a relatively unassuming college student. In the short time since Day’s rise has been meteoric and Lightspeed has gone viral, with performances by orchestras throughout the U.S. including the symphonies of Dallas, Fort Worth, Indianapolis, Houston, and Tulsa. Lightspeed is an energetic, tour-de-force for orchestra on a 7/8 meter and characterized by a relentless forward motion. A contrasting and more lyrical section in the straight meter of 4/4 appears fleetingly before a rousing fortississimo tutti which brings the piece to a triumphant finale.

A city is not beautiful by accident” writes historian William H. Wilson. City Beautiful takes its title and inspiration from the architectural movement of the late nineteenth and early twentieth centuries that gave us the boulevard and parks system in Kansas City. The movement had an impact on many other US cities as well, including Chicago, Detroit, and Washington, D.C., to name a few.

One of the principal philosophies underlying the movement and one that inspired me to write this composition was the belief in the “shaping influence of beauty” on society. Advocates believed that beautification of our physical surroundings would promote a sense of community and increase the quality of life in cities around the country. In many ways, I feel music has a similar power to influence and shape a community. This composition was commissioned as a celebration of the 60th anniversary of the Youth Symphony of Kansas City and I cannot help but ponder the wonderful shaping influence of this organization over sixty years of music making in our community.

Years ahead of her time, American composer and pianist Margaret Bonds was a truly remarkable musician. Following studies at Northwestern University from which she graduated with both bachelors and masters degrees, Bonds was the first black soloist to perform with the Chicago Symphony Orchestra in 1933. Equally gifted as a composer, famed composition pedagogue Nadia Boulanger reportedly refused Bonds as a student as Boulanger felt there was nothing she could offer Bonds, who she considered already significantly accomplished.

During her lifetime Bonds composed a great deal of vocal music, often collaborating with her lifetime friend, the poet Langston Hughes. The Montgomery Variations, dedicated to Martin Luther King, Jr., is arguably Bonds’ finest work. Based on the spiritual ‘I Want Jesus to Walk With Me’, the piece is a set of orchestral variations on this melody which appears in a variety of tonalities, colors and guises.

I. Decision
Under the leadership of Martin Luther King, Jr. and SCLC, Negroes in Montgomery decided to boycott the bus company and to fight for their rights as citizens.

II. Prayer Meeting
True to custom prayer meetings precede their action. Prayer meetings start quietly with humble petitions to God. During the course of the meeting, members seized with religious fervor shout and dance. Oblivious to their fellow worshipers, they exhibit their love of God and their Faith in Deliverance by gesticulation, clapping and beating their feet.

III. March
The Spirit of the Nazarene marching with them, the Negroes of Montgomery walked to their work rather than be segregated on the buses. The entire world, symbolically with them, marches.

IV. Dawn in Dixie
Dixie, the home of the camelias known as “pink perfection,” magnolias, jasmine and Spanish moss, awakened to the fact that something new was happening in the South.

V. One Sunday in the South
Children were in Sunday School [in Birmingham, Alabama] learning about Jesus, the Prince of Peace. Southern “die-hards” planted a bomb and several children were killed.

VI. Lament
The world was shaken by the cruelty of the Sunday School bombing. Negroes, as usual, leaned on their Jesus to carry them through this crisis of grief and humiliation.

VII. Benediction
A benign God, Father and Mother to all people, pours forth Love to His children – the good and the bad alike.

Rather amusingly, jazz great Artie Shaw never intended his Concerto for Clarinet to become a piece in the standard repertoire. It was composed for the 1940 film Second Chorus in which Shaw played himself and Fred Astaire starred as a trumpet player and aspiring bandleader. Astaire later called the film “the worst film I ever made,” however Shaw’s Concerto for Clarinet remains a supreme example of the jazz swing era. The concerto was an instant hit with its playful riffs, boogie-woogie, upbeat energy, and final high C, all elements which continue to please audiences and challenge clarinetists today.

Often referred to as ‘The Dean of African-American Composers’, William Grant Still blazed a trail for black conductors and composers as the first African American to conduct a major U.S. orchestra when he led the Los Angeles Philharmonic at the Hollywood Bowl in 1936. Also the first African American composer to have a symphony performed by a major U.S. orchestra, the piece we are performing this evening, Symphony No. 1 in A-flat Major, ‘Afro-American,’ was premiered by the Rochester Philharmonic Orchestra in 1931. This work was actually the most popular and performed symphony by an American composer in the 20 years up until 1950.

Still began his career as an arranger for jazz orchestras and theaters, working with W.C. Handy, Artie Shaw, Paul Whiteman and others. His immersion in jazz and blues manifested in his Symphony No. 1, in which the themes are blues-inspired and modal harmonies predominate.

Still did not write a program for Symphony No. 1, but rather provided a subtitle and an epigraph for each movement, intended to guide the listener through aspects of the African American experience. The epigraphs for each movement are taken from poems by Paul Laurence Dunbar, a poet of the late 19th and early 20th century who wrote several poems in a Black American dialect. On revising the symphony in 1935, Still removed his original movement subtitles, however the score still includes the epigraphs of Dunbar’s poems.

Still also closes the first movement with a stanza by Dunbar:

All my life long twell de night has pas’
Let de wo’k come ez it will,
So dat I fin’ you, my honey,
at last,
Somewhaih des ovah de hill.

The second movement, Adagio, was originally subtitled ‘Sorrow’, and is more spiritual-influenced than the first movement. Still chose a stanza from Dunbar’s poem ‘W’en I Gits Home’ as the epigraph.

The third movement, Animato, is lively and jazz-influenced and carries the apt subtitle ‘Humor’. Featuring the addition of a banjo, this movement cleverly incorporates a quote from George Gershwin’s immensely popular tune ‘I’ve Got Rhythm’, which had premiered on Broadway in the musical Girl Crazy only a few weeks earlier. This movement’s epigraph is from Dunbar’s poem ‘An Antebellum Sermon’.

The final movement, Lento con risoluzione, was subtitled ‘Aspiration’. The slow and beautiful chorale-like opening is followed by a lively central section and closes with a powerful maestoso coda in D-flat major. The final epigraph is from Dunbar’s poem ‘Ode to Ethiopia’.

Be proud, my Race, in mind and soul,
Thy name is writ on Glory’s scroll
In characters of fire.
High ‘mid the clouds of Fame’s bright sky,
Thy banner’s blazoned folds now fly,
And truth shall lift them higher.