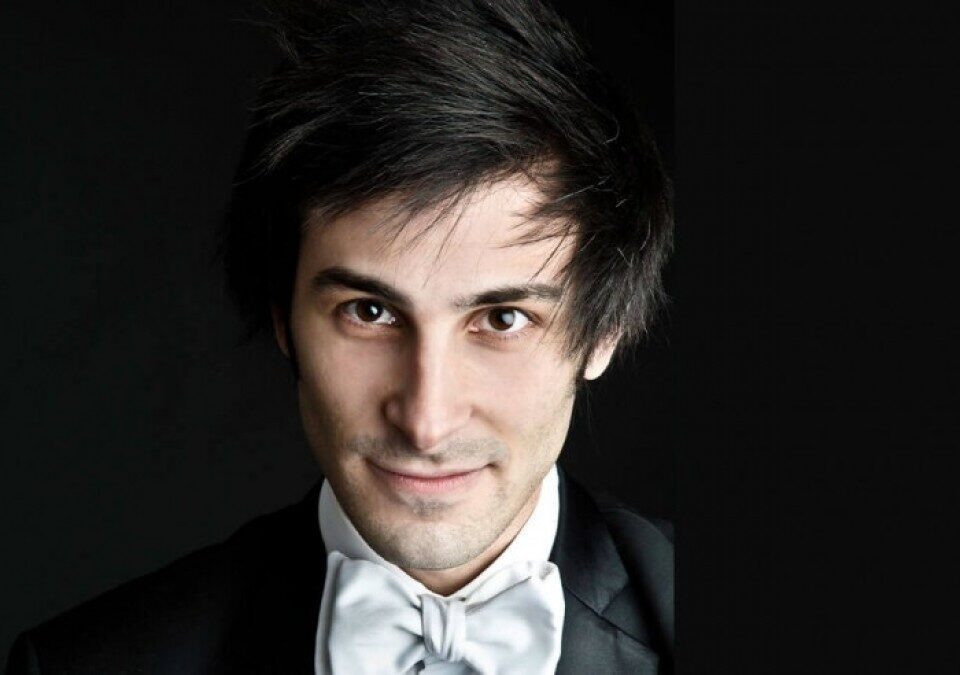 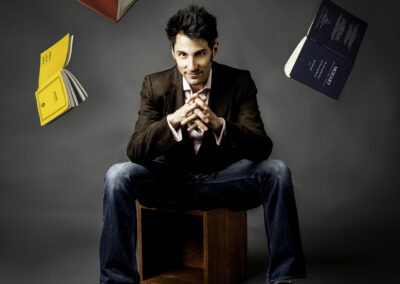 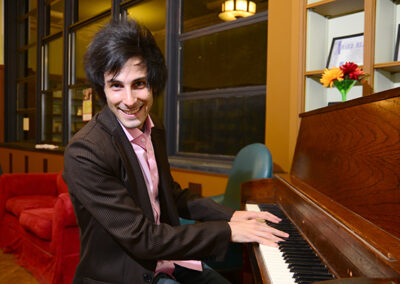 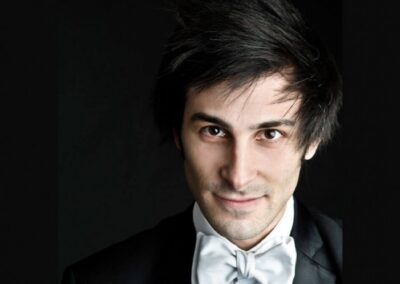 A musician of remarkable versatility, Isaac Selya has extensive experience as a conductor, pianist, vocal coach, cellist and entrepreneur. He is the founder and Artistic Director of Queen City Opera, where he has led acclaimed performances that combine high-caliber opera with contemporary relevance, including the following projects:

-Verdi’s Defiant Requiem, in commemoration of the Jewish musicians of the Terezín Concentration Camp, who memorized Verdi’s Requiem using a single copy of the score and performed it as an act of defiance against the Nazis.
-Beethoven’s Fidelio in collaboration with Amnesty International and the Ohio Innocence Project.
-A production of Mozart’s Don Giovanni that featured workshops on sexual assault and consent.
-The world premiere of the critical edition of Weber’s Der Freischütz focusing on evidence-based approaches to gun violence prevention.
-The Ohio premiere of Tchaikovsky’s Iolanta in collaboration with the Cincinnati Association for the Blind and Visually Impaired.

He conducted the Los Angeles stage premiere of Tchaikovsky’s Iolanta at Pacific Opera Project, in collaboration with the National Federation for the Blind, and with blind soprano Cristina Jones in the titl­­e role. He is one of the few conductors in the world who has conducted all of Mozart’s German-language operas, and he joined the Juilliard Opera as Assistant Conductor for their production of Mozart’s Così fan tutte.

His performance of Wagner’s Siegfried was the first production of the work in Ohio in over a century. In recognition of his talent and entrepreneurialism, Musical America featured him as a Spotlight Artist. Committed to ensuring that music education is accessible to everyone, Isaac serves as a Cello Teaching Artist and conductor at the MYCincinnati Youth Orchestra, an El Sistema-inspired program in Cincinnati.

Equally at home in the symphonic repertoire, Isaac made his German debut conducting the Deutsche Kammerphilharmonie Bremen in the fall of 2018. He has conducted the Xiamen Philharmonic, the Dayton Philharmonic, the National Symphony of Guatemala, the Chelsea Symphony, and the Cincinnati Chamber Orchestra. He has served as Assistant Conductor for Cincinnati Opera and the Glimmerglass Festival, where he conducted the first-ever reading of the revised version of Philip Glass’s Appomattox, with the composer present.

Isaac’s work can also be heard on the soundtrack to the award-winning video game, Masquerada: Songs and Shadows. He started his professional music career at the age of 18 singing in the chorus of the Great Synagogue in Jerusalem. He holds a BA from Yale College, where he was principal cellist of the Yale Symphony and sang in Yale’s Schola Cantorum. He completed an MM in conducting at Mannes College, where he won a competitive grant from the New School Green Fund to present a concert dealing with environmental advocacy. And he holds a doctorate from the University of Cincinnati-College Conservatory of Music, where his research focused on Mozart’s use of the baritone voice. His scholarship on Weber’s Der Freischütz was included in the 2019 edition of the Weberiana Journal of the Internationale Carl Maria von Weber-Gesellschaft. He has also contributed scholarship to publishers Bärenreiter, Henle, Schott, Breitkopf & Härtel, and the University of Chicago Press/Casa Ricordi in the critical editions of the works of Beethoven, Bizet, Mendelssohn, Mozart, Stravinsky, Tchaikovsky, Verdi, Wagner, and Weber. He has received career grants from the Olgai Forrai Foundation and the Anna Sosenko Assist Trust.

Isaac maintains a catalogue of parallel fifths and other voice leading irregularities he finds in the works of common-practice composers. You can see them, as well as his commentary on counterpoint at his blog here.

Isaac enjoys exercise, vegetarian cooking, and reading science news. He has studied eight languages, and he owns more pairs of red shoes than can fit in his closet. He is very talented at Nintendo games, although he does not have as much time to play them as he did in his youth, when his parents bribed him to practice the cello more by buying him video games. He has three cats: Tosca, and Aida, and Tamino.

In 1808, on a cold December day, Beethoven presented an epic four-hour concert featuring works for orchestra, singers, and piano. It was Beethoven’s final appearance as a piano soloist with orchestra, as his hearing loss was making such collaborations impossible.

Beethoven opened the concert with his Symphony No. 6, in which he made a bold claim that he wrote out clearly on the title page: although music is an abstract art, it can convey the emotions of specific events, people, or experiences. Beethoven demonstrated this idea by encapsulating the emotions and experiences of a hike through nature into a symphony, replete with echoes of birdsong that Beethoven must have enjoyed before he went deaf.

All the pieces on this program are evidence for Beethoven’s idea that abstract music can communicate the emotions of specific events. In this program, we explore music that depicts birds and that expresses the exhilarating feelings of flight.

Beethoven began his career in the shadow of Mozart. The Viennese theater group that hosted Beethoven’s marathon concert in 1808 had worked with Mozart 17 years earlier on a revolutionary project. Whereas most composers would only write operas on commission from wealthy noblemen or national theaters, Mozart had an entrepreneurial spirit, and decided to compose an opera on a subject that inspired him. The impresario of the theater, Emmanuel Schikaneder, was a close friend of Mozart’s, and he provided the libretto. Schikaneder was an accomplished Shakespearean actor, and he wrote a brilliant plot devise that spins the moral compass of the audience. At the beginning of the opera, the audience believes that the hero, Prince Tamino, is on a mission from the Queen of the Night to rescue her daughter Pamina from the evil wizard Sarastro, who has kidnapped her. But when Tamino confronts Sarastro, he begins to doubt the mission, and starts to think that the Queen of the Night is evil and power hungry. Sarastro enjoins the young man to think for himself and consider the evidence at hand, in a beautiful example of Enlightenment-era freethinking.

The opera is full of tensions between competing philosophies and artistic styles. On one hand, Mozart composed the opera as a personal passion project, but he also paused work on the The Magic Flute to take a lucrative royal commission to compose La Clemenza di Tito in honor of the coronation of Holy Roman Emperor Leopold II. Some of the music in The Magic Flute is complex and contrapunctal, with echoes of Johann Sebastian Bach, but Mozart balanced this with music in a folksy, charming idiom with popular appeal. This lighter musical style finds its expression in the character of the simple bird catcher Papageno, who was performed by the librettist and impresario Schikaneder himself. Papageno is not concerned with Tamino’s quest for heroism and truth; he cares only about finding a pretty girlfriend. The beginning of the overture sets a serious tone, with hints of austere Masonic rituals and contrasts of darkness and light. But the heavy tone quickly gives way to a sparkling texture in which the different instruments of the orchestra pass around a sprightly avian theme.

In 1875, Tchaikovsky had written a few operas, but had never tried his hand at a ballet. When he received a commission for a ballet from the Moscow Imperial Theater, the self-critical Tchaikovsky first studied the works of master ballet composers, such as Léo Delibe and Adolphe Adame. He quickly internalized the techniques of writing charming melodies and propulsive rhythms. He worked with astonishing speed on the project, recycling and repurposing some music he had composed for discarded operas.

Tchaikovsky’s prowess for creating an atmosphere is evident in the first seconds of the scene. String tremolos and harp arpeggios hint at the dark magic afoot, and the plaintive oboe conveys the tragic fate of Odette, who has been transformed into a swan by an evil wizard. In addition to his work as a composer, Tchaikovsky also reviewed concerts, and he wrote many mixed reviews of the works of Richard Wagner, which he considered to be well orchestrated, but too heavy. Tchaikovsky may have borrowed the famous oboe melody from his favorite Wagner opera, which also features swans. In the first act of Wagner’s Lohengrin, a night in armor arrives on the back of a swan to defend a woman who has been wrongly accused of a crime. Before he draws his sword, he sings a sad melody, warning her that she must never ask him his name. The gesture must have struck Tchaikovsky, as the melody found its way into Swan Lake.

Berceuse and Finale from The Firebird • Igor Stravinsky
Composed in 1919
Est. Duration: 6-7 minutes

When Stravinsky was 8 years old, he saw a performance of Tchaikovsky’s ballet The Sleeping Beauty, which kindled his interest in becoming a composer. He received his first ballet commission in 1909, to compose a ballet based on a Russian fairy tale. The Firebird tells the story of a magical bird that helps Prince Ivan defeat the evil wizard Koschei the Immortal. The Firebird bewitches Koschei and his servants, forcing them to dance until they fall asleep. The Berceuse depicts the sleeping Koschei and his servants, while Prince Ivan, with the help of the Firebird, finds Koschei’s soul hidden in an egg in a tree stump. They destroy the egg, leading to general rejoicing upon the end of Koschei’s reign.

Stravinsky’s later ballets such as Petrushka and The Rite of Spring had mixed receptions at their premieres because they pushed the boundaries of tonal music. The Firebird was an immediate success because of its resplendent orchestration and melodies, although some critics accused Stravinsky of using too much dissonance.

Beethoven’s Symphony No. 6 breaks the mold of classical symphonies. Rather than writing abstract “pure” music, Beethoven sought to depict the emotions of a hike in the woods. As a result, he composed a work in 5 movements, rather than the traditional 4-movement structure common in the symphonies of Haydn and Mozart. Each movement depicts a different part of Beethoven’s hike.

In the first movement, Beethoven writes music that captures his feelings upon arriving in the countryside. The middle section contains rhythmic cells that repeat, slowly building in intensity in a technique that may have inspired the 20th century “Minimalist” school of Philip Glass and John Adams.

In the second movement, Beethoven depicts a flowing brook with a lilting figure in the cellos and violas. The movement ends with birdcalls; in the score, Beethoven specifies that the calls belong to the nightingale, quail, and cuckoo.

The third movement contains a lively rustic dance, which gives way to a storm in the fourth movement. As the storm subsides, Beethoven concludes the symphony with a shepherd’s hymn of thanks.