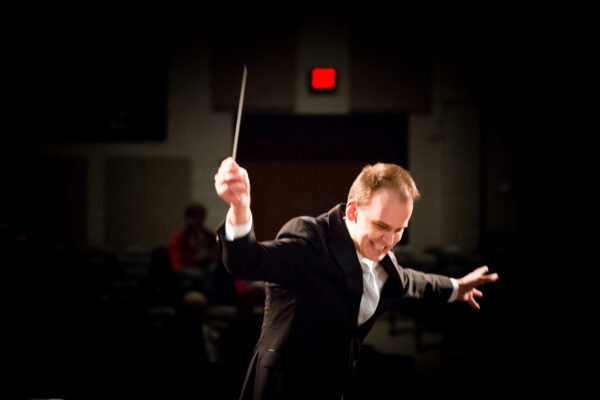 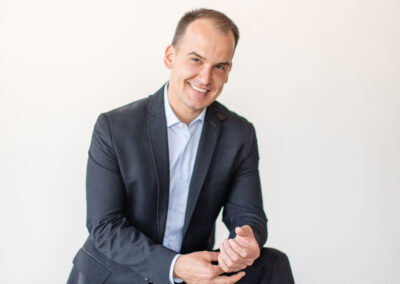 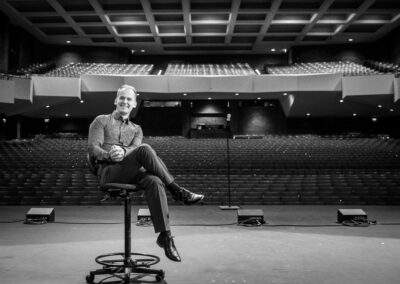 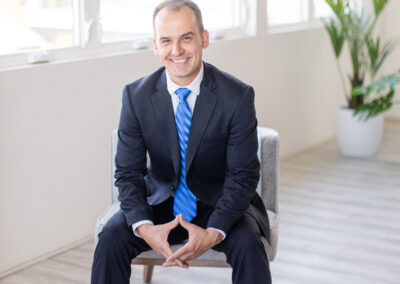 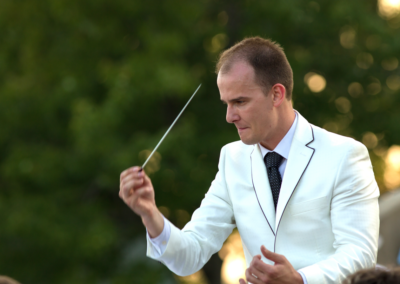 Described as “a charismatic conductor whose passion radiates from the podium” (The Virginian-Pilot), conductor Sergey Bogza is known for his unique approach to working with orchestras and engaging audiences on and off the podium.  Equally comfortable leading productions of opera, ballet, and concert repertoire, Bogza’s energy and artistic integrity are highly regarded by audiences and musicians alike.  He has been awarded top prizes at international conducting competitions and is an active composer of symphonic and chamber music.  Combining the roles of a conductor and composer, the premieres of his works are enthusiastically received by audiences and musical ensembles across the United States and Europe.

In March of 2016, Bogza became the Music Director and Conductor of the Millikin-Decatur Symphony Orchestra and has since accomplished consecutive seasons of increased subscription ticket sales, donor engagement, and audience growth.  Bogza has been praised for his thoughtful approach to programming, collaborations, and entertaining and engaging pre-concert talks, and is widely credited with fostering the orchestra’s exceptional artistic growth.

As a guest conductor, Bogza cultivates a burgeoning international presence that has brought him engagements in the USA and Europe with orchestras, ballet companies, and festivals.  He has guest conducted musicians of the Minnesota Orchestra, Virginia Beach Symphony, Pazardzhik Symphony Orchestra, Sheboygan Symphony Orchestra, Auburn Symphony Orchestra, Illinois Valley Symphony Orchestra, and Gwinnett Symphony Orchestra.  Bogza also served as an assistant conductor for Joffrey Ballet’s 100-year anniversary production of The Rite of Spring, and the University of Minnesota’s Benjamin Britten’s Peace Project, which combined the musical talents of students from North America and Germany, culminating in the critically acclaimed performances of Benjamin Britten’s War Requiem in the USA and abroad.  For three consecutive summers, he was selected to conduct public concerts of the B-Minor Mass, St. Matthew Passion, and the Christmas Oratorio at the Oregon Bach Festival.

Bogza is responsible for a number of successful collaborations and is regarded for his sensitive approach.  In 2017, he engaged an award-winning choreographer Roger Van Fleteren to present an abridged version of Prokofiev’s ballet Romeo and Juliet and the fruitful relationship led to future projects with The Alabama Ballet.  That same year, Bogza conducted two sold-out performances of The Moscow Ballet’s The Great Russian Nutcracker, a production that included the company’s professional dancers, 120 community dancers, and a local children’s chorus.  In 2018, in collaboration with Millikin University’s School of Theatre and Dance, Bogza led three sold-out performances of The Phantom of the Opera and productions of Pirates of Penzance, Menotti’s The Medium, and Barber’s A Hand of Bridge.  At the University of Minnesota, he led the workshop premiere of two operas, Sister Carrie and Rosencrantz and Guildenstern Are Dead, by Grammy-winning composer Robert Aldridge and assisted with productions of Così fan tutte, Falstaff, and Bartered Bride, among others.

Off the podium, Bogza is an endurance athlete who regularly competes in ultra-marathons and long-distance bike rides.  Having won gold medals and finished over a dozen races, his future aspirations include competing for The Triple Crown (three consecutive 200-mile races) in 2023, and Badwater 135 in 2024.  Bogza trains with his two Belgian Malinois dogs, Samson and Stella, and is an avid chef of Slavic cuisine.

“I had three goals for this Atlanta Symphony’s anniversary piece: I wanted to use the orchestra as a virtuosic instrument, I wanted to use triads (three-note tonal chords), and I wanted the music to be thematic. I knew I would welcome swifter changes of mood than what is found in my earlier music.  What came out (somewhat unexpectedly) was a sense of valor among short flashes and sweeps that reminded me of something in flight: a light spear thrown, perhaps, but not in the sense of a weapon, more in the spirit of a competition.  When the word javelin suddenly suggested itself, I couldn’t help but recall the 1970s model of sports car my Dad owned, identified by that name, but I concluded, why not?  Even that association isn’t so far off from the general feeling of the piece.  Its fast tempo calls for 591 measures to evoke the generally uplifting, sometimes courageous, yet playful spirit.”

Nostalgic longing permeates The Lark Ascending. Not a cozy nostalgia that looks back to a rose-tinted past, but rather a spiritual fervor for an idyllic paradise, expressed as the song of a soaring skylark and, on the earth below, human life — a poignant metaphor for our collective yearning for transcendence. “For singing till his heaven fills, ‘Tis love of earth that he instils,” reads George Meredith’s poem “The Lark Ascending,” in which Vaughan Williams found his inspiration for a composition that inevitably ranks at or near first place in polls of audiences’ favorite pieces.

The solo violin plays the role of the lark, in rhapsodic solo passages that at some times evoke the song of the skylark while at others introduce thematic material. The orchestra represents the earth, humanity, both underpinning the violin’s lofty flights and introducing, in a midway episode, the sounds of daily life via a gentle rustic tune that suggests a country village.

In the 1870s, it was unlikely that one would have heard of a Bohemian musician named Antonín Dvořák unless one lived in the vicinity of Prague. An orchestral violist, church organist, teacher, and aspiring composer, Dvořák spent his twenties and thirties struggling to support himself and his growing young family. However, when his persistent submissions to the Austrian State Prize for composition caught the attention of panelist Johannes Brahms, Dvořák’s fortunes changed almost overnight: he was invited by Simrock, Brahms’ publisher, to join the firm’s illustrious roster of composers.

Following the model of Brahms’ wildly successful Hungarian Dances published a decade earlier, Dvořák put forth his own Slavonic Dances, opus 46, in 1878. They were four hand piano duets in their first incarnation. They flew off the retailers’ shelves, so Simrock requested arrangements for orchestra. Rapid, piquant contrasts between the major and minor modes are features of this music, along with driving rhythms and catchy melodic figures: these pieces are lyrical and danceable all at once. Dvořák’s sparkling orchestrations amplify and colorize these core characteristics for the benefit of a large concert hall, while the original “black and white” versions for piano were intended for cozy readings at home.

Sergei Rachmaninoff had great regard for the Philadelphia Orchestra and its music director, Eugene Ormandy. As a pianist, he had performed with them on several occasions, and as a composer, he appreciated the full, rich sound Ormandy and his musicians produced. Sometime during the 1930s, Rachmaninoff remarked that he always had the unique sound of this ensemble in his head while he was composing orchestral music: “[I would] rather perform with the Philadelphia Orchestra than any other of the world.”

Nervous pulsing violins open the Allegro, over which the winds mutter a descending minor triad (three-note chord). The strings set a quickstep tempo, while the opening triad becomes both the melodic and harmonic foundation of the movement as it is repeated, reversed and otherwise developed. The introspective middle section of the movement features the first substantial melody, played by the distinctively melancholy voice of the alto saxophone. The final section of the movement returns to the agitated quickstep and fluttering triad.

The Andante con moto begins with muted trumpets and pizzicato strings executing a rather lopsided waltz rhythm that stutters fitfully, followed by a subdued violin solo. The main theme has none of the Viennese lightness of a Strauss waltz; instead its haunting, ghostly quality borders on the macabre and is suggestive of Sibelius’ Valse triste or Ravel’s eerie La valse. The waltz is periodically interrupted by sinister blasts from the brass section.

In the Lento assai: Allegro vivace, Rachmaninoff returns to the haunting liturgical melody of the Dies irae (Day of Wrath) from the requiem mass. Rachmaninoff had used this iconic melody before, most notably in his Rhapsody on a Theme of Paganini. In this work the distinctive descending line has even more suggestive power; we can hear it as Rachmaninoff’s final statement about the end of his compositional career. This movement is the most sweeping and symphonic of the three and uses the full force of the orchestra’s array of sounds, moods, and colors. In addition to the Dies irae, Rachmaninoff also incorporates other melodies from the Russian Orthodox liturgy, including Blagosloven Yesi, Gospodi, from Rachmaninoff’s choral masterpiece, All-Night Vigil, which describes Christ’s resurrection. On the final page of the manuscript of the Symphonic Dances, Rachmaninoff wrote, “I thank Thee, Lord!”