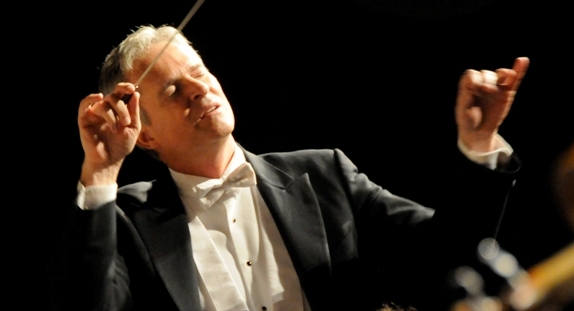 David Bowden has been the artistic leader of the award-winning Philharmonic since its founding in 1987.

Born and raised in North Carolina, David has loved music since he was a very young child.  At the age of four, he began studying the piano with his mother.  Beginning in elementary school, he was accepted as a student in piano at Duke University. In addition to the piano, he has played oboe, organ, clarinet, and viola.

While a student at Wheaton, David met his wife, Donna, a registered nurse, during an intramural volleyball game.  Graduate school took them to Bloomington, where David received his Master of Music in Choral Conducting at Indiana University.  After teaching in the college setting for several years, David returned to IU and earned a doctorate in orchestral conducting.

David’s love of singing and choral music led him to found the Philharmonic Chorus, which has performed many choral masterpieces during David’s tenure with the Philharmonic.

Dr. Charles Webb, in reviewing a recent performance, stated, “Columbus, Indiana, can be very proud of organizations such as the Columbus Indiana Philharmonic and the Philharmonic Chorus, both of which perform at such a high level of excellence.  None of these significant accomplishments would be possible, however, without the skilled leadership of David Bowden.  He is a treasure for this community and indeed for the entire state.”

David enjoys performing a wide variety of repertoire – from opera to symphonic standards to pops and big band music.  He especially enjoys educational concerts for schools, hoping to inspire children to choose to learn to play an instrument, believing that making music changes lives.

Bowden has received five national ASCAP awards for programming, has been broadcast nation-wide many times on Performance Today and other public radio programs, and has guest conducted across the US and in Europe.  He is a member of the Pi Kappa Lambda National Music Honor Society and is listed in Who’s Who in America and Who’s Who in the World.  He is a member of the Board of Directors of the Conductors Guild, an international service organization for conductors, and has served as Director of the Conductor’s Guild New Music Project for over a decade.

In addition to the Philharmonic, David is the Music Director and Conductor of the Carmel and Terre Haute Symphony Orchestras.  He has also worked in church music ministry for most of his life.

When not working, David and his wife enjoy traveling, relaxing at the beach or in the mountains, and spending time with their families.  They are blessed to have all four parents alive and in good health, two beautiful daughters (and a handsome son-in-law!) and two delightful granddaughters to share their lives.